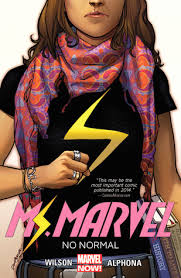 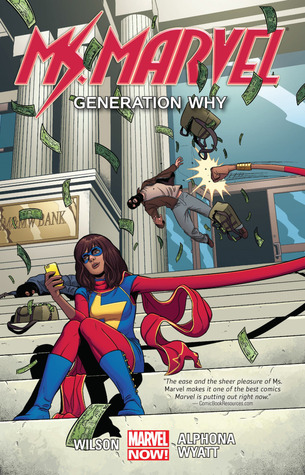 I have to be completely honest these are the first comic books I’ve ever read from cover to cover.  So, while I’m in no position to review the art work, or historical role of the original Ms. Marvel or even have a valid opinion on the superhero story lines, I do want to cover the Islamic elements because even as someone as outside the comic book world as I am, I knew that Marvel’s new Ms. Marvel is a Pakistani-American Muslim girl from Jersey and that’s pretty big.

I was intimidated to read No Normal, I ordered it from Scholastic and have had it on my shelf for a while, I was excited, but nervous. But then I ordered the second one, which is also a collection of 5 comic books, and thought, let’s do this.  Both collections are easy reads, and the text and what to read first in each story frame is clear.  As with comics and graphic novels the pictures convey much of the story so there isn’t a lot of “explanation,” but the story is compelling enough, that even a novice like me didn’t get too hung up on what was going on and how it could be possible.   While it may tempt younger children, I would hold off until the reader is a teen, especially if the reader is Muslim.  There is a bit of drug use and alcohol in No Normal and obviously violence, but at it’s core it is a story of a girl trying to discover who she is and there is some angsty teenage stuff that someone who hasn’t gone through the emotions, might take as attacks on Islam, parents, and culture.

Kamala Khan is a high school student in Jersey City, New Jersey.  She has a Muslim friend, Nakia, who wears hijab, and non Muslim friends of both genders that seem to support her faith and culture, almost more than she does.  The story opens with her sniffing bacon and her friends humoring her oddness.  Having grown up with the same group of friends around her, they understand her quirks and nerdiness and she seems to fit in.  As with most teens though, she feels on the “outside” and Kamala right away tries to seem cool with the more popular crowd.  She  is struggling to find herself within her Pakistani culture, her American life, her Islamic beliefs and teenage friends, information all presented in the first few pages while at the local convenience store hangout.  A lot for Kamala to balance and she hasn’t even discovered her “powers” yet.

Kamala’s parents initially seem more “cultural” than religious as her father chastises Kamala’s brother Aamir for being too religious, yet is constantly on Kamala, presumably because she is a girl.  In a fit of defiance against her parents strict curfew, Kamala sneaks out of the house to attend a party, accidentally drinks alcohol (she spits it out) and gets caught in some “fog” that gives her morphing, stretching, embiggening, and quick healing powers.

As Kamala tests how her powers work, and what they mean, there are a few funny asides that appeal to Muslim readers: she attempts to use her Burkini as a base for her super hero disguise, and her mother threatens to send her to the Sheikh if she gets caught sneaking out again.  Her parents start to grow on you though, the mom is a very stereotypical immigrant mother who cares for her daughter in a worrying nagging way, the dad actually tries to communicate with Kamala and comes across a little more genuine toward the end of the first collection.  Her brother seems to be level headed, but a minor influence.  He sticks up for her and tries to help, but it doesn’t seem like they are that close.   The final scene in No Normal left a little bit of a bitter taste in my mouth and I was glad that I already had Generation Why to dive right into and not let the conclusion of the first one fester in my head.  Kamala shows up to a wedding late, complete in Shalwar Kameez (Pakistani clothing) and gets in an argument with her mom.  Kamala says, “You and Baba want me to be a perfect little Muslim Girl–straight A’s, med school, no boys, no booze, then some hand picked rich husband from Karachi and a billion babies.”  The mom says, “Your father and I want the best for our only daughter our expectations are high so that your successes will be many.”  It goes back and fourth then the mom says she is grounded and the book ends with Kamala retorting, “wanna bet…?”  While I’m sure most every Muslim American teen has felt this way, I don’t think I’d want my 9 year-old-daughter thinking that is how narrow success is defined, or that being the best you can be is a punishment. It’s probably a realistic gripe, but to have it be the last impression, naturally brought out my defensive instincts.

A lot of the awkwardness and stage setting in No Normal is resolved by Generation Why and I found I enjoyed it a lot more than I thought I would.  I might even be anxiously waiting to see what happens next.  Kamala is sent to the Sheikh and while she is intentionally vague about telling him what is going on with her, she does suffice it to say she is trying to help people and he responds by telling her to do it with as much honor and skill as she can. I love that he wasn’t putting her down, but rather trying to mentor her spiritually to find her self and do so honorably.  Really the only other religious/cultural scene is when Lockjaw a giant dog with transporting abilities shows up to help Kamala and her parents say he can stay, but outside because he isn’t clean.  I don’t know if non-Muslims will fully understand why, but it made me chuckle.  It also made me like her family a bit more.  They are strict, but not unreasonable.  They didn’t say, “no” they found a compromise.

Generation Why contains more action than back story.  I’m not entirely sure why Wolverine shows up, I have no idea who the lady in charge of stuff is with Captain America, and I’m not sure why no one finds it odd that the Inventor is a bird man, but hey it is fun.  And it definitely had me cheering on Ms. Marvel as she empowers her generation and learns that being American Muslim might be the easiest of her identity issues when she learns she is inhuman.  It gets a little cheesy, but the foundation of comic books being good against evil, lends itself to that right?

Overall, I think I would recommend both collections are read together, as it gives a better picture of what Ms. Marvel is and can be.  I think thus far the author has done a good job of showing that she is Muslim and that her faith adds depth to the character.  Her tenacity, persistence, determination, compassion for animals, her humor, her nerdiness, all make her very like-able and admirable.  I probably wouldn’t do it as a Book Club selection, because our school only goes to 8th grade and being an Islamic School I don’t know that most of the students feel the identity crisis until possibly much later if at all.  But I think the books would work well for discussion with older kids.  Topics of what youth can do, their role in preserving the planet, discovering your sense of self and purposes are all there in comic book, super hero, action packed form! 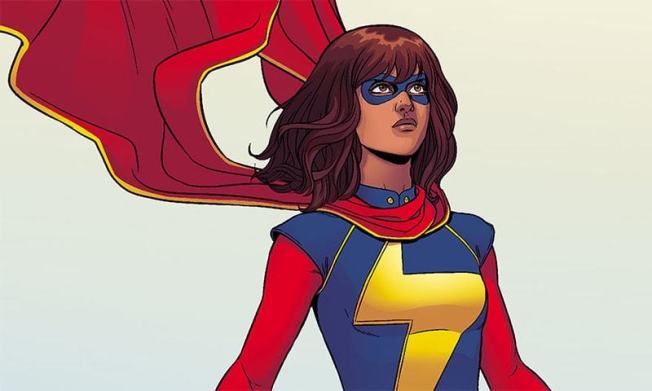